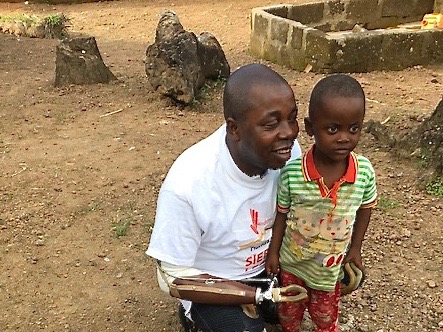 USACF recently formed an exciting partnership with Hands On Sierra Leone. The head of HOSL is Sheku Mansaray. As a child, Sheku was one of thousands of innocent civilians whose limbs were amputated by rebels whose atrocities left deep scars across the country.  Sheku first came to America as a teenager to receive prosthetics and went on to begin a new life in New York City. Four years ago Sheku founded HOSL focusing on helping the children of the many people who were victims of the civil war.

The focus of HOSL has been to help children of amputees. For the last five years, HOSL has been paying the school fees for 53 children. The children attend 15 schools around the towns of Makeni, Kono, Luing and Masiaka. But much more needs to be done. None of their schools have libraries. USACF and HOSL are working together to fill a container with children’s books and other needed donations. A 40-foot HC container will be purchased in November and eventually converted into a library/learning center once it is put down in the town of Makeni.

The Book Fairies in Freeport, Long Island have already pledged 600 boxes of children’s books. Wonderland Books will bring 125 boxes of books and clothing down from Southport, Ct. USACF has set aside 300 boxes of books, schools supplies, soccer gear and clothing for this shipment. Crutches and soccer uniforms have already been collected for a one-legged soccer league. We will fill this container before November 7th.. This shipment will change thousands of lives.

There are exciting plans to bring USACF’s Bridge Pi into the learning center created inside the container. Teachers will attend workshops to learn to use the Bridge Pi and greatly enhance their student’s access to information. Sheku’s dream of helping the people of Sierra Leone is taking shape. With your support, we will turn his dream into reality.