In 2003, Mark Grashow and Sheri Saltzberg journeyed to Lasuka, Zambia to attend a friend’s wedding. Following the wedding, they traveled to Zimbabwe’s second city, Bulawayo where their son, Alexander Grashow, had done development work in partnership with Zimbabwe’s Organization of Rural Associations for Progress (ORAP).  During a tour of several rural schools Mark and Sheri were struck by the need. The schools had very little. There were no libraries, no textbooks, no school supplies and no sports equipment. Some students lacked shoes and warm clothes for the winter. 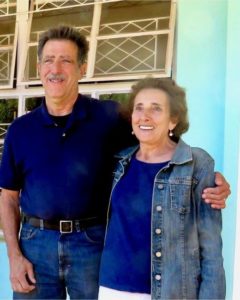 Mark had been a high school math teacher in New York City for 34 years before he retired in 2001.  He had seen how back in Brooklyn his former school would throw away all its excess library books, textbooks and sports equipment into a dumpster behind the school. Mark also knew that hundreds of schools across New York City were doing the same thing. The waste and the discrepancies between the American schools and the African schools were just too much to bear. Mark and Sheri decided to take action.

USACF’s first container was shipped from Brooklyn in 2005. ORAP distributed the contents and soon found significant positive impacts at its 35 schools.  The program quickly expanded.  More and more containers were shipped and the number of targeted schools grew to 75 and then to 175.  By 2018, 290 Zimbabwean schools were receiving donations. The Zimbabwe model was so successful that USACF expanded into Ghana and Tanzania. In Ghana, we partnered with the National Partnership of Children’s Trust and The Mothers of Africa. The Ghana partnership was hugely successful and is still flourishing. The Tanzanian program ran for three years and served 38 schools. The Tanzanian program was terminated after three shipments because of the lack of a strong partner on the ground.

When the program ended in Tanzania, USACF expanded its program into South Africa. In 2010, USACF formed a partnership with two NGOs in South Africa. The first was Sharing to Learn, which supports schools in Makuleke, South Africa. The second was Equal Education, operating out of Cape Town, which received their first container in 2012.

Today, the focus of USACF’s work in South Africa is in the province of Eastern Cape. Our partner in Eastern Cape is Ubank, the bank of the mining community. Ubank now receives all South African containers from USACF and distributes the donations to more than 50 schools.

Over the years, USACF expanded its scope of operations beyond the shipment of donations. We repair school furniture, paint schools, provide thousands of soccer balls, promote soccer tournaments, design new classroom blocks and take American volunteers to Africa to work in their schools. 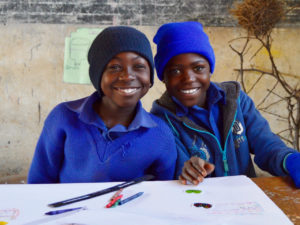 USACF’s work has had an incredible impact on both African school children and American school children. African headmasters boast a new culture of reading. Test scores have risen dramatically. More students are fluent English speakers. Hundreds of students sit at their own desks, and their teachers have their own wardrobes in which to keep their belongings. Teachers work in improved learning environments. Staff morale is on the rise. American children have learned that they live in a global community and are capable of changing lives half a world away. USACF has touched and continues to touch many lives.

Hardly a week goes by without an NGO reaching out to USACF for advice or a request for a new partnership. USACF‘s door is always open and we are always ready to make the world a little better place for its children.